A Conversation with Dan Pelosi “GrossyPelosi” This installment of our “Conversations” series might leave you hungry. You’ve been warned!

Dan Pelosi, better known online as GrossyPelosi, is a food blogger and influencer with a quick wit and huge personality. He’s currently in the midst of a surge of success and popularity, with over 60,000 Instagram followers (and counting!) and a feature in a New York Times article that was released just a few weeks after his chat with us.

Dan is a childhood friend of our very own Annie Yukish, so our conversation started with some reminiscing from the two of them about growing up together in Waterbury, CT. We had a blast hearing from Dan, and amongst all the laughs we learned several valuable nuggets. Read on for more about Dan’s story and the lessons he shared that can help all of us.

PIVOTING BEFORE IT WAS “IN”

We’ve likely all observed that one of the official buzzwords of the past year was “pivot.” Countless companies and individuals quickly adapted their offerings to meet new and different demands. Our conversation with Dan started in a similar vein, however, he was ahead of the curve with a pivot that began at the end of 2019.

A little background: after studying Architecture and Design at the Rhode Island School of Design, Dan worked his way up in a few fashion brands and is currently a Creative Director in New York City. He shared that he has always been on this career trajectory and never imagined he would pivot his focus to any other interests. However, Dan shared that 2019 was a difficult year for him, with a lot of disappointments that left him in a place where he was looking to do something new.

In December 2019, Dan hosted his fifth annual holiday cookie party and, like so much of his life (he’s a self-declared sharer), he posted about it on Instagram, where he had established a modest following. Dan reflected on his Instagram presence and realized he had created a brand and garnered a following without even intending to, but he also saw an opportunity to create something really special by putting some focused attention towards the project. This was the turning point for his pivot—he had been planting seeds that had culminated into establishing a lifestyle brand for himself.

These are all snapshots you’d see on Dan’s Instagram feed before he decided to really focus on establishing his brand.

You’ll still see Dan share all of the above (and more) on his feed today, but at the beginning of 2020, Dan decided to dedicate 80% of his Instagram to food content. At Think Up, we know a strong brand is one that is targeted and well-defined. As part of his own branding process, Dan knew he needed to zero in on what his focus would be. He has a variety of passions and could have chosen any number of them to dedicate his little corner of the Internet to, but his heart was pulled towards food. Turns out, he was giving the people exactly what they wanted, and by early March, he had gained a significant amount of followers and established a solid “food influencer” account.

We all know what happened in March 2020—COVID-19 hit and the world changed. Everyone was cooking from home more, experimenting with homemade bread and whipped coffee. Dan took this opportunity to share his tips on stocking a pantry. Plus, with working from home, he was able to share his cooking ventures throughout the week instead of mostly on weekends.

Dan experienced another influx of followers as people began to realize he was teaching the basics of cooking on Instagram and sharing his recipes for comfort food—a necessity during such a tumultuous time. Two words…vodka sawce! He began receiving messages from followers saying, “I wanted to let you know that you’re one of the main things getting me through this pandemic.” Dan was thrilled. He told us, “I couldn’t believe it. Of all the things that could happen to me this year, for me to become a safe space and a resource for people during this really tough time was really, really great.”

TO THINE OWN SELF BE TRUE

One thing that became abundantly clear as we spoke with Dan is that he knows who he is and isn’t afraid to be unapologetically himself. From GrossyPelosi’s inception, Dan wanted his personality and his own unique perspective on food and cooking to come through across every facet of his brand.

Dan’s heart for cooking can be traced back to when he was young in the kitchen with his mom. She verbally explained to him what she was doing as she prepared the food, and Dan eagerly absorbed it all. These moments that were so integral for him then, now come through in his recipes on his website. Dan explained he writes his recipes as if he’s right there in the kitchen with you, talking you through each step the way his mother did for him. His familial roots are evident in his recipes as well; sharing his Grandma Millie’s cookies, his beloved grandfather Bimpy’s pizza and pasta, and his dad’s Thanksgiving stuffing.

GrossyPelosi’s visual branding is just as distinct as Dan’s personality. He told us he has a collection of old family cookbooks—you know the ones: spiralbound, with recipes submitted by individuals from a community. Dan said he is “obsessed with the energy of these books,” drawing a comparison between the “love, attention, indecision, and inclusion” that is evident in these cookbooks and his own personal energy and brand. These cookbooks became a sort of “brand book” for Dan as he began to establish and develop GrossyPelosi—and if the signature checkerboard pattern and spaghetti bear illustration don’t just scream “community cookbook,” we’re not sure what does.

Bottom line: Dan knows who he is, and he knows his audience and how to give them what they’re looking for. When he was first getting started and sharing his recipes only on Instagram, he heard from his followers that they wanted to share his recipes with their moms or grandmas, so he built a user-friendly website that anyone could navigate and established a unique relationship with recipe-friendly Pinterest. You won’t find long paragraphs and annoying pop-up ads that you have to scroll past just to find the recipe, but you will find funny quips and helpful tips, easy-to-follow recipes, and step-by-step guides with photos of each part of the process.

Stay in the Loop 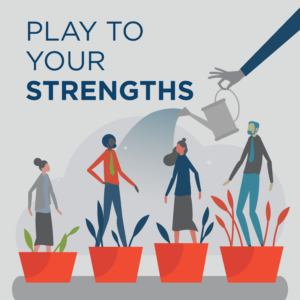 Play To Your Strengths: How to Improve Performance And Unlock Your Team’s Potential

While it may seem natural to immediately look for gaps and areas for improvement across an organization, the surprising key to maximizing team member performance is not rooted in perfecting weaknesses. Instead, it’s about encouraging team members to identify and lean into their strengths. How We Contribute: A Conversation With Marie Potter

Dissatisfaction and discontent are plaguing the world of work—we see it everywhere we turn in statistics on burnout, mental health challenges, and employee well-being. But

Our projects almost always involve change management. We generally understand why people resist change and how we can help them work through it. Recently, we’ve

© Copyright Think Up 2022. All Rights Reserved.